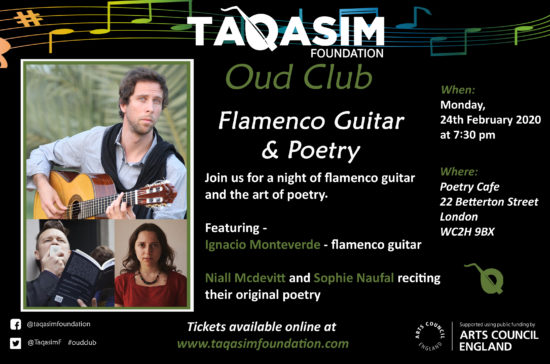 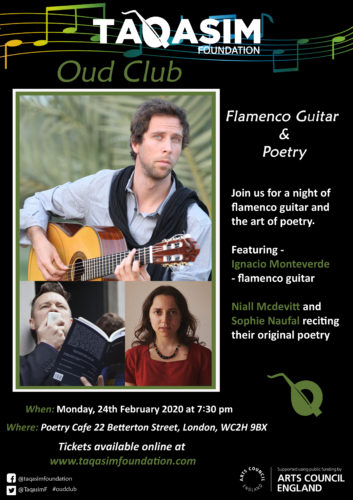 The Taqasim Oud Club this February. Flamenco Guitar & Poetry, will highlight the sounds of Andalusia played by Ignacio Monteverde alongside poetry recitations of Niall Mcdevitt and Sophie Naufal’s original work. 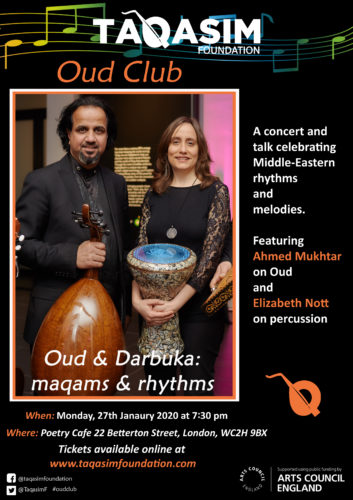 The Taqasim Foundation will start the 2020 Oud Club series with the concert Oud & Darbuka: maqams & rhythms. It will feature oud master Ahmed Mukhtar and Elizabeth Nott of percussion.

A concert of fusion and conversation between Ahmed Mukhtar’s Oud and Ignacio Monteverde’s flamenco Guitar. 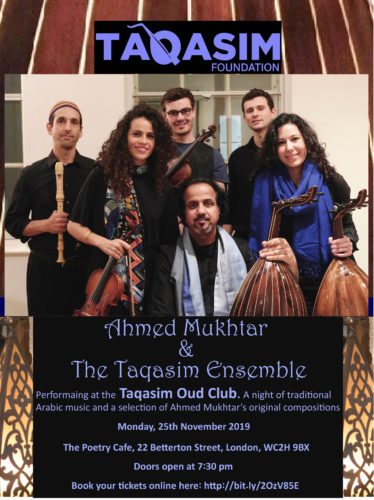 The Taqasim Foundation and the Taqasim Music School have put together a very special performance for our monthly Oud Club on the 25th of November.

The Taqasim Ensemble, lead by Ahmed Mukhtar, will present a night of traditional Arabic music and a selection of Ahmed Mukhtar’s original compositions. The ensemble consists of oud, Middle-Eastern violin (playing quarter-tones), viola and recorder.
Spaces are limited!

Maqam & Oud: Faith & Music in the Middle East & a performance by the Taqasim Ensemble 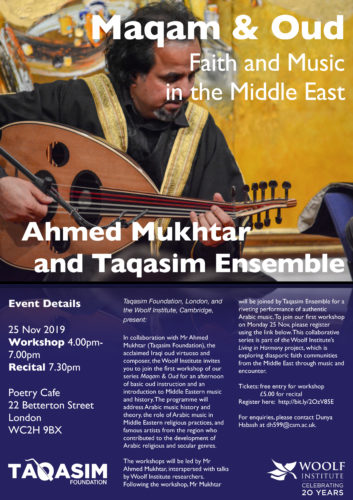 The Taqasim Foundation, London, has teamed up with the Woolf Institute, Cambridge, to join the first workshop of a series titled: Maqam & Oud. At the workshop, Ahmed Mukhtar will address Arabic music history and theory and the role it has played in the

secular and religious contexts of the Middle-East.

The Taqasim Ensemble, lead by Ahmed Mukhtar, will perform after the workshop. The ensemble consists of oud, Middle-Eastern violins (playing quarter-tones), viola and recorder. The group has come together to play a mixed repertoire of traditional Middle-Eastern pieces and original compositions by Mukhtar.

Our termly Taqasim Oud Clinic is back!
Teachers will be available to re-string and examine your oud, and carry out basic repairs.

See you there,
The TMS team

We are pleased to announce that the next Taqasim Oud Club in October is hosting the acclaimed Iraqi poet Abdul Hamid alSayeh.

The night will begin at 7:30 with an Open-Mic session of music and poetry, followed by a poetry recitation by alSayeh of his work in Arabic and in English translation. 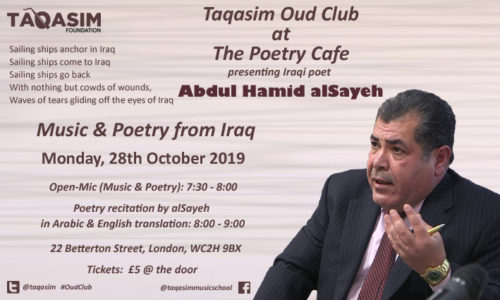 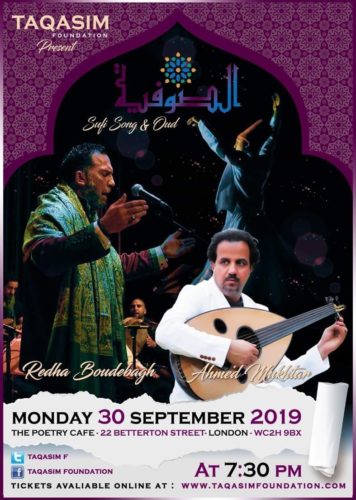 The Taqasim Foundation & the Taqasim Music School are pleased to announce a special program for our September Taqasim Oud Club!

Oud master, Ahmed Mukhtar and renowned Algerian Sufi artist, Redha Boudebagh have joined forces to bring you a very special program that has been a year in the making. Join us on the 30th of September at the Poetry Café, Covent Garden and experience the unique fusion of Sufi maqam, Baghdadi oud and Andalusian vocals.

Purchase your tickets here
Sorry, this event has been sold out